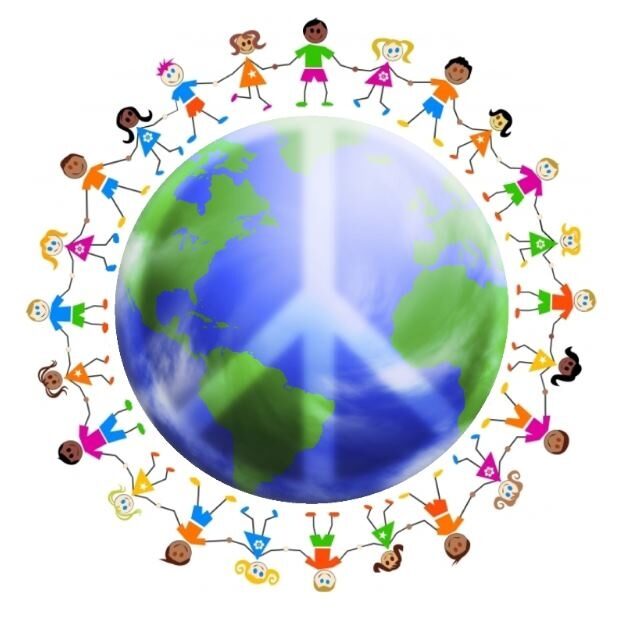 The idea of World Peace sounds beautiful and isn’t it the dream of most people on our planet? I remember watching beauty pageants in the 1970s and the contestants almost always ended their interviews with a goal of “World Peace”. Unfortunately, did anyone take them seriously? Did they even think it was possible? Or, was it simply “lip service” because it’s a nice idea but nobody really believes it is possible?

“I believe World Peace IS possible and I believe it can happen within two generations.”

The reality is, humans have simply not been capable of World Peace because it was not until quite recently, in mankind’s 200,000 year history, that our basic needs for existence have been met consistently. Even as few as 150 years ago humans could not reliably source or preserve food.

Simply surviving a winter, a natural disaster such as a hurricane, tornado, earthquake, or an attack by a wild animal was not guaranteed in the late 1800s or early 1900s. Our basic survival was being tested daily so the opportunity to live peacefully and actually THRIVE was virtually impossible.

However, for the past 50 years or so, humans have been able to exist, sort of. But, even in 2018, 80% of the world’s population does not have enough food or water in a given day. Therefore, humanity’s basic needs to exist are actually still not being met. If so many people are still unable to meet their needs to exist then how can they possibly meet their human need for love, belonging and connection? In other words, our emotional needs and emotional health.

Still, I believe of the 20% of people who are able to meet their basic needs to exist a large subset can begin to truly nurture the next critical need, their emotional health. And that subset can make a significant difference toward World Peace.

Why Is Emotional Health So Important?

Humans are self-destructing at an astonishing rate. It seems we are actually going backwards in life expectancy while the human race does continue to grow. Sadly, most of us are struggling with some kind of self-destructive behavior even if we don’t realize it.

It has become the norm to drink alcohol several times a week after work or binge on the weekends and many people struggle with alcohol abuse. Similarly, drug addiction continues to be on the rise and the opioid epidemic is out of control. Sexual assault is occurring in nearly every industry and gun violence, especially in the US, is practically a weekly occurrence. Depression/suicide and anxiety are seeing record numbers and the medications seem to only mask the problem and not address its root cause. While many of you will disagree, the root cause of most behaviors are NOT genetic or mental. (Afterall, people used to believe doctors were transferring “morbid poison” from dissected corpses to birthing mothers until handwashing became common practice in 1850. [Source] Many ideas we used to believe as “fact” have later been proven to not be true at all.)

The truth is, humans will do anything to avoid pain. The pain being experienced is not physical, it’s not mental either but actually emotional. When a person doesn’t FEEL truly loved, connected and have a sense of belonging they will do anything to compensate for that pain.

“Humans will choose, consciously or subconsciously, behaviors in order to meet, suppress, deflect, mask or otherwise NOT FEEL their emotional pain.”

Ask any drug addict, self-harm practicer or obsessive eater why they do so and they can probably tell you.

What nurtures emotional health more than anything else (or hurts it) is our relationships and connections. Until only the past several decades have humans even needed to be concerned about emotional health because their primary concern was simply to exist. Now, many of us are existing yet we and most other humans are self-destructing and certainly not thriving.

If enough people can love and support each other, and this happens in small, personal groups, then we will no longer need to compensate for our emotional pain or trauma. We will no longer self-destruct through our behaviors and we will actually participate in more constructive behaviors.

When enough people, and I don’t know how many that is, are constructively behaving then our self-destruction will be limited and the opportunity to thrive will increase. When enough of the world’s population is having their emotional needs met then they will behave more constructively and we will have less conflict and war.

“The more emotionally healthy each person is the less destructive they will be to themselves and others and when enough people are behaving this way then mankind will achieve World Peace.”

The Next Two Generations

The next two generations, behaving more constructively, will help nurture others and their collective emotional health will spread. It can spread fast because emotional health is fairly quick to have a positive impact and even more people will thrive and thrive faster.

World Peace is finally possible and it can be accomplished within two generations if we start now. We need only begin to authentically connect by truly hearing, valuing and supporting each other. With love, connection and belonging, humans are exceptional animals and we must be there for each other, unconditionally and in return others will be there for us.