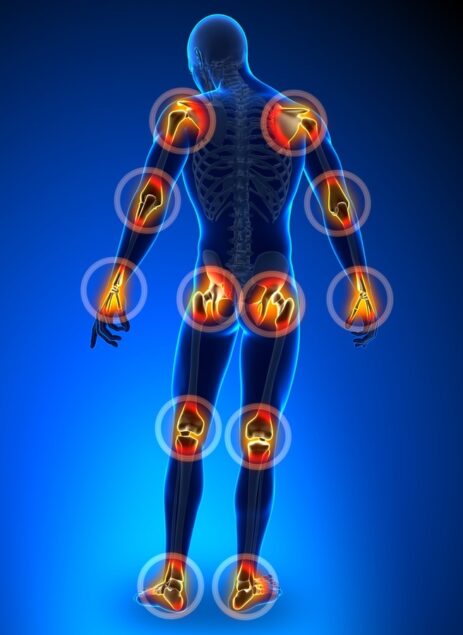 If you’re an athlete, you’ve probably suffered or struggled with some kind of injury that did not result from a traumatic event.

Do you suffer from some kind of tendinitis?

Do you hear yourself making excuses like, “I can’t run because I have bad knees.”

Do you struggle with plantar fasciitis, Achilles tendinitis, Runner’s Knee, any unexplained knee pain, hip pain, been diagnosed with a hip labral tear or have other hip pain?

What about carpal tunnel syndrome, Tennis Elbow or poor range of motion or other shoulder pain?

Every joint, even those in your back and spine, can flare up and cause pain and grief. When we’re in pain and we can’t take it anymore we go to the doctor and if we’re not prescribed a host of anti-inflammatory drugs or given injections of cortisone we’ll be told to rest and “try” a full round of physical therapy. But really, you’re just masking or ignoring the problem hoping something will change. Hey, maybe it will!

What Do the Doctors and PTs Tell Us?

We may be told we have poor biomechanics.

We’re likely told we have an “overuse” injury, maybe a stress fracture (with no clear indication) and we’re at the risk or have developed arthritis even in your 20s or 30s or teens!

We’re probably scared into taking at least 8 weeks of rest and ice or else we’ll risk a catastrophic injury requiring surgery… and nobody wants surgery especially when it’s not a guaranteed cure.

My Background and Disclaimer

First, I am not a doctor, PT or healthcare practitioner of any kind. If you choose to give the following advice a try, do so at your own risk. You know your body better than anyone else so it’s up to you to make the best decisions for yourself.

Second, I am a 17-year Ironman Triathlete & Coach. Full disclosure: I am “basically” injury free. I have never missed a season due to injury. I, like most athletes, have my regular aches and pains and it was from a bout of Achilles Tendinitis in 2011 and much before then that I figured out how to help myself and now many others.

Third, I am also a Biomedical Engineer and while my focus now is Wellness and Emotional Health, I still have a keen understanding of body mechanics, bones, muscles, tendons, ligaments, etc. That’s how I’ve been named as an inventor on more than 70 patents and 10 publications.

Here is what I believe is happening and how you can fix it YOURSELF.

I believe the root cause of your issue is tight and knotted-up muscle fibers. I don’t mean tight like you need to stretch more. I mean tight like “tightened up” and cannot elongate but I prefer the term “knotted”. What I mean is your muscle has knotted-up fibers that cannot glide and elongate as needed. Further, since the muscle is partially knotted-up (and likely in more than one place) then it cannot fully “fire” or “activate” or “contract” which is why it presents as weakness. Weakness is the symptom your doctor and PT focus on which is why they prescribe strengthening. The problem actually is that your muscle is only firing at 80%, 70% or some lesser amount which means you cannot achieve a full contraction. A less than 100% contraction compared to the other side “appears” as weakness. It is not.

Strengthening is all well and good but what you’re really doing is building the muscle around the knot(s) which are then “compensating” for the knotted-up area that cannot fire. You’re actually not weak.

I was once coaching a first-time marathon runner who came to me for training but also had been suffering from hip pain. She had been diligently going to PT for 9 months with no improvement and still had to take Aleve for pain management before even a 3-mile run. My athlete was black, about 5’8’’ and 160 lbs. with a flat stomach and a stereotypical booty. She was told her glutes were weak. Are you kidding me?!?! She was the same size as me albeit proportioned a little differently. Her glutes were NOT weak. They were knotted-up. Two weeks on my program and she was running pain free and off pain medication.

Weakness is not the problem but knotted-up muscle fibers are. When this happens, the muscle cannot fully fire or elongate, as needed. When it cannot elongate or lengthen, it pulls on the next piece of anatomy which is the tendon. Tendons only have a certain Range Of Motion (ROM) and when reached they really don’t want to elongate any further. If you try then it could rupture and then you WILL need surgery.

The tendon, being pulled more than what is possible, reacts by resisting and becoming inflamed. That is your body saying, “No, stop doing this to me!”. The inflamed tendon is now your “tendinitis”. WAA, waa. Of course, we athletes are all about pushing ourselves so we keep on exercising and what happens next, well, the tendon begins to “pull out” of its insertion site. OUCH!!! This is where the tendon attaches to your bone and it’s typically around a joint. Now, your joint begins to inflame which is also known as arthritis. And, this is why your joint hurts.

Typical allopathic medicine will focus on the symptom and tell you about your arthritis and tendinitis but in reality, the problem is in your muscle. Note: If you suffer from arthritis, I would also recommend giving the treatment below a try.

The Treatment for Tendonitis and Joint Pain

Since the root cause of the pain problem is knotted-up muscle fibers then your remedy is to “work out” and eliminate the knots. There is a lot of talk about myofascial release and how the problem is actually a fascial issue and while this may also be true, I still believe the bigger issue is muscular and often deep inside the muscle.

If you can afford it, get as many professional massages as possible and tell them about your issue. If you cannot afford daily massages (like me) then I would recommend foam rolling or other self-massage devices. Rollers and the like have been around for a while and it’s wonderful to see them gain in popularity. Unfortunately, I believe most people are still using them incorrectly.

Here’s the regiment I used for my Achilles Tendinitis after being told by a marathon running podiatrist and surgeon that I MUST rest for 8-weeks and then, very slowly, ease back into running. Following my own plan, I was running again inside of 3 weeks and was able to ramp up quickly…. using caution, of course. The following routine I did 2x/day and then continued to maintain but not as aggressively. All told, I’ve been rolling for nearly two decades!

We’ve been taught for decades R.I.C.E. (Rest, Ice, Compression, Elevation) and while I’m a fan of ice therapy (especially for an acutely inflamed joint or right after a big, hot workout) I would absolutely NOT recommend icing your muscles, in this situation. Your goal here is also to increase the blood flow to the muscle and not constrict it with ice. (Note: Here is Dr. Gabe Mirkin’s article, from 2015, where he renounced his R.I.C.E. protocol. Also, I still do not fully agree with his “updated” recommendations.)

I hope I’ve provided an alternative understanding of your painful joints and tendinitis issues AND a way to remedy this issue WITHOUT a doctor, PT, time, or money. You still need to do the work but I can tell you I’ve helped dozens and dozens of people overcome their “injury” in a matter of days or weeks. I’ve also helped athletes prevent injury even when training from the couch to Ironman Triathlon in 6-months.

I also believe this kind of therapy, or something similar, could be an incredible remedy for people suffering from arthritis of all kinds. I would love to do some research if anyone is interested in collaborating. In the meantime, do the experiment for yourself and give it a try. You can go easy at first and at your own pace.

If you have any questions, I’d be happy to hear from you.

If you find this information valuable then I am happy to accept any monetary donation or payment you feel is suitable but certainly there is no obligation. Afterall, I’ve already told you everything!

If you would like me to teach a rolling class at your organization or club or privately, contact me and we can arrange a fee-based class.

Regardless of what I’ve mentioned here, if something you’re already doing is working for you, whatever is, then keep doing it. But if it’s not working then maybe it’s time to give another approach a try.